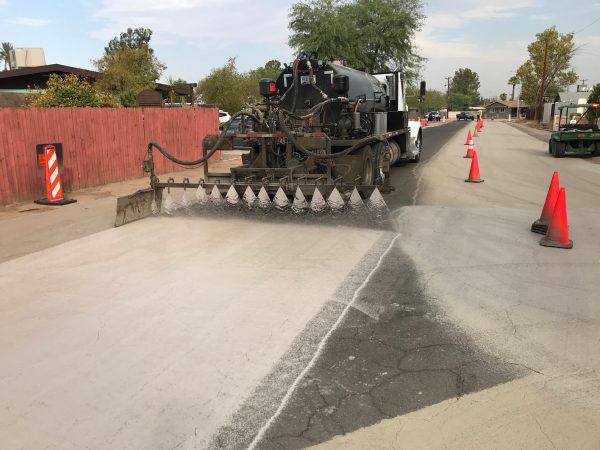 Congratulations to the 2022 WTS Metro Phoenix Innovative Transportation Solutions Project Award Recipient, the City of Phoenix, for its Cool Pavement Pilot Project. We asked them a few questions to learn about the project and why it's important for our region.

Can you give us a brief overview of the project and its timeline?

The City of Phoenix is among the hottest cities in the United States with unrelenting summer temperatures. Dark asphalt streets in the urban environment collect and retain heat, only to release it slowly overnight. This trapped and retained heat is a contributor to the urban heat island effect. A reflective asphalt coating called cool pavement was applied in the summer of 2020 in eight neighborhoods and one city park. Each of the areas was due for pavement maintenance and a safe, non-toxic seal coating with light and heat reflecting properties was used to rehabilitate these neighborhood roads.

The city partnered with Arizona State University (ASU) researchers to conduct scientific tests of the cool paved areas, studying how it performed and how it might be used to mitigate the urban heat island effect. In October 2021, ASU and the City of Phoenix announced the results of the first year of study indicating that the material is performing as expected and will be the topic of ongoing research. Soon after, the Street Transportation Department received Mayor and Council support to continue applying cool pavement as part of the city’s ongoing street maintenance program on areas appropriate for this type of seal coat.

How is this project advancing transportation in our region? What benefits will roadway users gain from it?

What lessons did the project team learn from incorporating new and innovative design elements?

There were innovations in both the application method and material development that came about through this project. The material was originally applied with a cart that deposited the material, which was then spread by hand with a squeegee. Seeing how labor intensive this was and how much manpower was required for each installation, the Street Transportation Department challenged the contractor to devise a spray application method that resulted in better coverage in far less time. The original formulation of cool pavement cured to a light gray color close to the color of new concrete. A new formulation that was darker yet had higher reflective values came out after the initial installations and is being used for all future applications.

What role(s) did women play on the project and how did they contribute to its successful completion?

Women from the Street Transportation Department and female scientists from ASU were instrumental in the establishment, launch and study of the cool pavement program. Public outreach and engagement was an essential element to the success of the program because what people would see on their neighborhood street would look substantially different after the cool pavement seal coating was applied. Before that even happened, the department needed expert analysis to identify areas due for pavement rehabilitation and in parts of the city that would experience different weather, shade, usage and other characteristics.

Team members nominated this award and their roles included:

What advice and suggestions would you have for other project teams considering innovation in their projects?

The foundation for the Street Transportation Department’s work rests on five pillars – Partnerships, Community Engagement, Mission Focus, Vision and Innovation. Cool pavement is a program that springs from all five of those pillars with innovation and community engagement being especially important. Successful public acceptance of the innovative material was largely due to the way it was presented to the public. The Department explained what the problem was we were trying to solve, how we planned to apply a new formulation of an existing material (the cool pavement version of a seal coating material) and promised to keep people informed on the results and ongoing scientific study. Innovation is an essential part of our department’s work to solve problems and improve the long-term livability of Phoenix.