To the general public, transportation is usually only noticed when something goes wrong. But for a select few, it is recognized for the revolutionary instrument of equity that it can be. From her native Brooklyn to her adopted Los Angeles, 2020 WTS-LA $5,000 Jacobs Undergraduate Scholarship winner Yerandy Pacheco recognizes transportation’s power to level the socio-economic playing field. 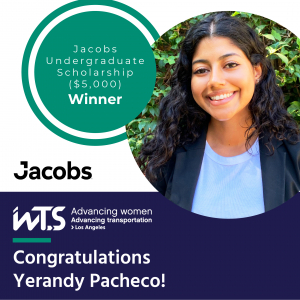 “Public transportation plays an integral role within low-income communities. Similarly, a lack of transit crucially limits opportunities for many. After moving from New York City to Los Angeles to attend the University of Southern California (USC), I witnessed the vast difference in public transit between the two cities. I realized the extensive subway system in New York was the anomaly, and the majority of America relies on private automobiles. Not only was there a lack of comprehensive public transit, but also of pedestrian and cyclist amenities. The roads of Los Angeles belong to automobiles and not to pedestrians, cyclists, or public transportation. This recognition has deeply influenced my future career goals with transportation, as connectivity and accessibility are imperative for a high-quality life. Providing adequate means to safely walk, cycle, and travel within cities, offers residents of all incomes and neighborhoods opportunity to excel.”

Pacheco also credits her family for helping to put her in a position where she could make such observations. Raised in a predominantly Dominican neighborhood where “a lack of educational opportunities and proficiency in English” made higher education inaccessible, Pacheco’s family made sure that she attended exceptional schools that offered that advantage. But to get to those schools, she took public transportation, cementing her belief in its power to transform.

A senior at USC studying Urban Planning and Economics, Pacheco carries a 3.8 grade point average in her major. She will graduate in May. After graduation, she looks to pursue a master’s degree in city planning. But wherever her advance studies lead, transportation will be an integral component. And transportation and the communities it serves will be better because of that.

“Yerandy Pacheco is a driven and talented burgeoning urban planner with a keen interest in transportation equity,” explains Amina Hassen, an urban planner at WXY architecture + urban design, the firm where Pacheco interned. “I was Yerandy’s supervisor through her summer urban planning internship at WXY Architecture + Urban Design from June-August 2019. Yerandy contributed on a range of projects to support a multi-disciplinary urban planning, design, and architecture team. While supporting the urban planning team, Yerandy showed strong research, writing and analysis skills. She quickly learned technical programs such as Adobe Creative Suite (Photoshop, InDesign, and Illustrator) and ArcGIS to produce deliverables on client work. She is also a talented public speaker who just as comfortable leading staff through presentations of her research as she was in facilitating participants in public engagement sessions. I was especially struck by Yerandy’s thoughtful approach to analyzing public comments and developing draft themes and focus areas in a master plan process she helped facilitate. Her analysis was instrumental in developing walkability as a key theme for the town’s master plan…

“Over the past year, she has pursued coursework related to transportation policy and secured an internship with LA Metro…Yerandy is an ambitious, thoughtful, ethical, and reliable student and employee. She shows great response to supervision and worked very well with different staff people across a range of projects.”

Most people only notice transportation when something goes wrong. For them, it almost always just remains invisible. But to a very observant few, transportation reveals the essential role it plays in everyone’s life, and the absolute power it holds in transforming some of those lives.