Never judge a book by its cover. It’s a cliché for a reason. For example, you would never know on first glance that the 2020 WTS-LA $4,500 SCAG Community College Scholarship Winner Shantal Bustamante is going to become a commercial airline pilot. And it’s exactly that misperception—that use of the cliché—that she looks to change with her career. 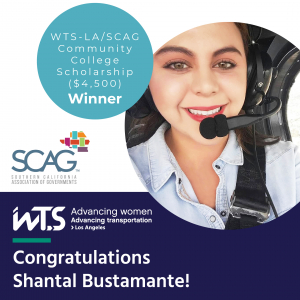 “When I turned 18, my older sister was diagnosed with scleroderma and I chose to work to help with her medical bills. I developed a strong work ethic and appreciated many things in life that other people took for granted like health and family. Unfortunately, she lost her battle against scleroderma 3 years later. I was devasted and decided to move to Peru with my parents.”

To help her heal, Shantal volunteered at a local dog shelter. She also kept busy studying and working fulltime. Then, in 2012, her father died suddenly. Facing mounting bills and wanting to care for her mother, Shantal knew she had to find lucrative work quickly. A friend told her that flight attendants earned a good salary. So, she passed the series of difficult exams and won a position with Latam Airlines. But something bothered her.

“In Peru flight attendants are mostly women and considered ‘the face’ of the airlines maintaining a certain ‘look,’ while the pilots are considered the ‘brains’ of the aircraft and mostly men. I was bothered by the obvious gender roles and lack of female pilots…Out of the hundred pilots I worked with, I had the opportunity to meet two female pilots who inspired me and showed me what it took to be a pilot. I wanted to be the brains of the aircraft and not just the face. Many people told me this was a man’s job and I would be discriminated against, but I still made the brave decision to leave it all and move back to California in 2018 to become a pilot.” It was a gutsy move, but Shantal is not one to settle for less.

With a bachelor’s degree in International Business from the Peruvian University, Shantal looks to gain an Aviation Administration Certificate and commercial pilot license from Glendale Community College in December 2021. Shantal maintains a perfect 4.0 grade point average and is the first in her family to go to college. Naturally, she’s also the first in her family to become a pilot. And she wants to use that position to inspire more women and Latinos to explore aviation from the left cockpit seat. According to those who know her well, she will make that happen.

“I have known Shantal Bustamante since she was born. Our families were very close…,” explains Southwest Airlines First Officer Silvia Peschke. “Shantal reached out to me when she moved back to the United States last year to ask me about becoming a pilot…I did a career change later in life to follow my passion too…Shantal is a very hard worker, determined and passionate. She is a loving daughter and a great friend. She has the right attitude to succeed…She sacrificed a comfortable living in Peru to move to the United States and follow her heart, and there is no doubt in my mind that she will succeed. She has the right attitude and will not let anything get in her way.”

Never judge a book by its cover. That’s because you can never truly see someone’s struggles and challenges, victories and achievements, from just looking at her or him. Though impossible to see from a casual glance, some individuals possess nearly superhuman strength and determination in their ability to change their lives and pursue their passions, despite incredible setbacks and disadvantages. Shantal Bustamante serves as a perfect example of exactly that. For that reason, she richly deserves to be named the 2020 WTS-LA $4,500 SCAG Community College Scholarship Winner!