People who possess an indomitable spirit often change history. Usually, this takes the form of a world leader, a scion of industry, or the pioneer of a mass movement. But sometimes a college student defies convention so dramatically that she or he seems like that spirit embodied, even at such a young age. 2020 WTS-LA $5,000 Environmental Science Associates Undergraduate Scholarship winner Jessica Brown is that student. 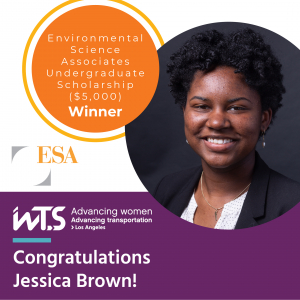 “As a child, I learned the value of serving others. I saw my mother, a community activist, fight for issues like safety and health…Her activism influenced me, and as young as age six, I spoke before my local school board seeking increased funding for more challenging books and upkeep to our school building. As I grew older, I developed my own areas of passion to serve. As a Girl Scout Ambassador, I completed a project to promote environmentalism and modify behaviors to prevent litter in my county earning the highest recognition a scout can achieve, the Gold Award. Girl Scouts taught me to, ‘help people at all times,’ stated in the Scout Promise; I keep this mantra as I navigate my college career.”

To Brown, that mantra is an action plan. For example, she joined the University of Southern California (USC) chapter of the National Society of Black Engineers (NSBE) to find a mentor. And she did. But then she became the NSBE Membership Chair to “foster community and the support systems we have as black engineers at USC.” In addition, she guided first-year students, many of whom now have summer internships and/or executive board positions with NSBE. This year she’ll serve as NSBE vice president. And that’s just one example of many.

A junior at USC studying civil engineering, Brown looks to graduate in May 2022. In addition to NSBE, Brown also belongs to USC’s student chapter of the Institute of Transportation Engineers (ITE). She also mentors a rising high school senior on college admissions. And her ultimate professional goal? “I see myself using my technical knowledge in engineering to help the communities that nurtured me.” Her altruistic beliefs and her unique talents have not gone unnoticed.

“Jessica learned more about transportation issues after she regularly attended the ITE USC chapter meetings,” explains Eric Shen, PE, PTP, Director of Maritime Administration Mid-Pacific Gateway Office of USDOT, WTS-LA Board Member At-Large, USC Professor and Faculty Advisor of ITE USC. “In late 2019, USC and UCLA students in ITE chapters worked to finalize the preparation of the annual Student Leadership Summit with a budget of over $20,000…Jessica assisted in numerous logistical tasks leading to the actual summit. She also served as moderator during a panel discussion where she managed the flow of discussions and directed questions from the audience to appropriate panelist for response. It is clear to me that Jessica has earned the trust from her peers with her intellect, poise, and leadership.”