Equity takes many forms. From grand policy initiatives to simple procedures to a discussion at a watercooler, fighting for equity often comes about through personal experience, grit, and a willingness to stand up for what’s right. For 2020 WTS-LA $4,500 HNTB Community College Scholarship Winner Annamaria Viazzo, her equity fight began during a simple bike ride. 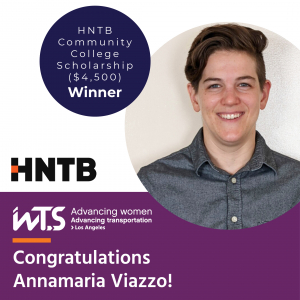 “Though I always had a bike growing up, I never truly appreciated it as a vehicle for transportation until the summer of 2013. I joined a charity ride called Bike & Build, which organizes cross country trips to raise money and awareness for affordable housing. We stopped at small towns along the way to help build with various affordable housing non-profits and to give presentations about affordable housing. This experience helped me see what inequality looked like throughout the country…During this trip I also learned how powerful of a tool a road bike could be. Previously I had only biked a few blocks around town, and a bike was more toy than anything else. After my ride, however, I realized both how far a bike could truly take you and also how dangerous and unsuited for cycling our roads are.”

After graduating from Stony Brook University with an undergraduate biology degree, Viazzo became a bike mechanic at REI in Santa Monica. And there, her equity observations came into even greater focus. “Working at this location specifically, provided me with even more evidence of transportation’s role in class equity. Our clientele consisted of high-end recreational bikes often barely used and low-end work horses. The contrast was stark. The people who needed cycling as a safe, consistent, and affordable form of travel could neither afford to purchase a reliable bike nor safety equipment (lights, helmets, cycling clothing)…Many middle to upper class commuters also had the option to look at housing along bike friendly roads or dedicated bike paths. This luxury can make biking as a form of transportation seem more accessible than it actually is in our country.”

And Viazzo has a plan to change that. Working towards a master’s degree in mechanical engineering at Glendale Community College—with a perfect 4.0 grade point average—Viazzo looks to graduate this May and use her degree to develop “mechanisms which efficiently integrate bikes into public transport and developing a more affordable reliable bike…Unfortunately, though, I also learned how difficult it could be as a female mechanic to convince others that I was good at my job despite all the evidence. These realizations have led me to my goal of receiving a graduate degree in mechanical engineering…with a master’s degree in mechanical engineering, I can work on developing a more affordable and reliable ‘workhorse’ bike and I can work on mechanisms of bike storage, which can be used with our current bus and train systems to increase the viability of longer commutes by bike.”

Without question, Viazzo is a rolling force to be reckoned with. And others have taken notice.

In strongly recommending her, Glendale Community College Engineering Chair and Professor Christopher Herwerth understands Viazzo’s vision and believes she will realize it. “Annamaria is a very strong engineering student who mixes a mature attitude with good time management skills…she takes her coursework and program seriously. Annamaria is highly likely to achieve her engineering academic goals.

Fighting for equity can take many forms. For some, it’s a vast policy initiative for a large jurisdiction, for others it can be as simple and profound as not giving up your seat on a bus. Every struggle is different. Annamaria Viazzo’s fight for equity involves making biking viable for underserved communities. And if her past is any indication, we know she’ll win the fight. And that’s why we’re happy to name her the 2020 WTS-LA $4,500 HNTB Community College Scholarship Winner!